A Year of Changes

Well, we’ve been dark for quite a while.  Sorry, but we’ve had a huge number of transitions in the works.

One of the big ones involved the sale of my interest in my company.  As you might be aware, although I had not been active at IHC for a number of years, I still had an ownership interest.  After a very long series of fits and starts, my former partners and I found a middle ground and they have taken over full ownership.  Jim and Joel have done and incredible job of guiding IHC over the years and I’m so happy that they are leading a great company into a great future!

We had had major changes in our boating life too.  Towards the end of 2017 we learned of a new boat that we became very interested in.  In September of 2017 we went to England to see an example of the catamaran and visit the shipyard.  After long thought and much discussion we signed a contract early in 2018 for construction of Bluewater 50 Catamaran by Discovery Yachts. 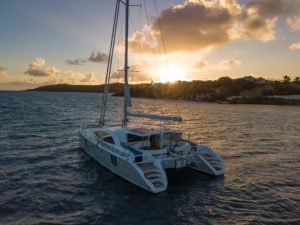 Our cat will be the 5th built by Discovery.  The following video is of their 3rd build and is very similar to ours.

Once we made the decision to move forward with the new yacht, much of the 2018 and 2019 so far has been driven by things we needed to do over the approximately 18 months it would take to build the boat.

First order of business would be to get Echo ready for sale.  We were in Antigua when we made the decision so we spent the early part of 2018 moving towards Florida.  Although we moved through waters we had traveled before, as always we found beauty and interest along the path.  Our objective would be to get Echo settled in Florida where we could get some pre sale work done during hurricane season 2018.

The next step would be to list her for sale in fall 2018 and hopefully find her a new family for the 2018/2019 winter season. Happy to report, Echo has a new home and has been reborn as Amazing Grace.  Mary and I wish fair winds Noel on his journeys.

Once we had Echo back in Florida and had plans made for upgrades and eventual sale, we could turn our thoughts to how we would spend the remaining year or so while we were “between” boats.

It has been a really exciting year!  We started with a cross country RV journey from Florida to Washington State. We traveled back roads from the southeast to the northwest on a corner to corner route across the country.

Throughout the 18 month build we have traveled to England every 6 to 8 weeks to monitor progress and make decisions.  Since we had to go so often, we tried make each trans Atlantic about 2 weeks where we would visit the boat, take a week or so to have a European side trip, then return to England for another boat visit before returning to the States.  On one trip we spent about a week in London, on another we sailed with Len on sister Bluewater 50 Whimbrel from Scotland down the Irish Sea to South England, on another we visited friends in the south of France and the Cannes boat show, on the next trip we spent 10 fabulous days in Italy, on another we spent 10 days in Iceland, and last trip a week in Amsterdam.  It has really turned into a great way to visit many places!

Aside from the Europe trips, we also had 2 more non boat related trips.  In December we went on a educational tour in Cuba.  The tour was dedicated to helping Americans understand Cubans (and vice versa.)  We met many Cubans and learned much about the county and its history.  We hope our countries will become closer.

Finally, we spent a week on a ski trip with Brian, Katie, Sarah, and Kristi in British Columbia at Whistler.  The weather was great and the mountains stunning.  It was so nice to spend an extended time together.  Other than Mary fracturing her tibia, a fine time was had by all.

So, as of right now we are mid Atlantic on a cruise ship.  The ship is bound for Southampton which is where the new boat is nearing completion.  Our new boat should be ready soon and our plan is to stay around England through the rest of the 2019 sailing season.

Sorry for the long silence and the long winded update.  We will try to be more timely with news in the future! Love, Jeff and Mary

16 Responses to A Year of Changes